Biofuels offer a renewal energy source that can reduce dependence upon fossil fuels. The EPA reports that replacing fossil fuels with biofuels has the potential to reduce the negative effects of fossil fuel production and use, including conventional and greenhouse gases (GHG) pollutant emissions, exhaustible resource depletion, and dependence on unstable suppliers. Critics of biofuels argue that biofuel feedstocks require vast amounts of arable land, water and other resources that would otherwise be used for food production. Corn, for example, needs a large amount of water to grow, placing stress on fresh water supplies.

The problem of FOG

FOG is the byproduct of cooking with foods high in fat, such as butter, meat, sauces and cooking oil. FOG enters the sewer infrastructure from a variety of sources, particularly commercial facilities, such as restaurants and food service establishments, industrial sources, such as food manufacturers and processors, and residential properties. Ideally, all cookware and utensils are thoroughly wiped clear of grease prior to washing. However, it is faster and easier to remove the grease with hot water, sending it down the drain. Grease traps, if not maintained regularly, are quickly overwhelmed.

Once the grease cools, it begins to solidify and adhere to pipes. Over time, the grease blocks them altogether, causing backups and leading to serious public health and water quality problems. Additionally, when grease trap waste is dewatered and landfilled (a common treatment method used by haulers), all of that landfilled grease trap waste becomes methane and is released into the atmosphere as a very potent greenhouse gas.

Problems caused by FOG in the sewer system not only affect the performance of wastewater treatment facilities but also financially impact communities from cleanup due to pipe blockages, sewer backups or burst pipes. FOG is a serious and growing problem for the wastewater industry and the environment. Every year, grease costs municipalities billions of dollars in clogs, equipment damage, and sewer line repair. Not only is FOG costly to handle and remove, but it is also the number one cause of sewer backups.

The EPA estimates that the annual production of collected grease trap waste and uncollected grease entering sewage treatment facilities ranges from 800 to 17,000 pounds per restaurant, per year. Combined with the grease entering pipes from private homes and other industrial sources, and the massive amount of FOG accumulating in sewer lines leaves wastewater facilities struggling to remove and dispose of FOG before backups occur. 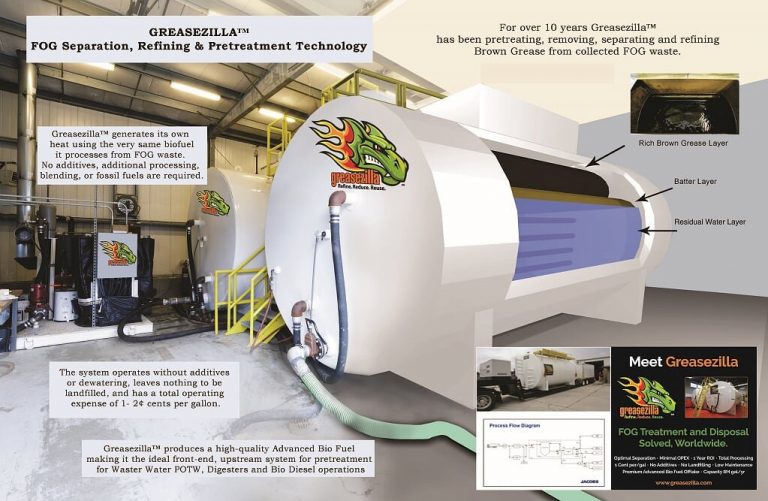 An innovative solution for FOG, Downey Ridge Environmental Company developed Greasezilla, a hydronic thermal separation and conversion technology to manage FOG while reclaiming an advanced biofuel. Greasezilla is designed to pretreat grease trap waste trucked to treatment facilities. The system removes nearly all grease at the front end without the need for polymers, flocculants or landfilling.

A boiler heats the reactor to a temperature of 160°F and separates the grease trap waste into three distinct layers:

The brown grease separation technology delivers a very low moisture, high FFA brown grease offtake, ideal as a substitute for fuel oil #5 and #6 or for use as a biodiesel feedstock. Greasezilla’s advanced biofuel, recovered from grease trap waste, is being converted into biodiesel through a joint venture with REA Resource Recovery Systems, LLC, which will be used by municipalities to fuel municipal fleets.

The Greasezilla hydronic thermal separation system can potentially process up to 40,000 gallons of grease trap waste per day, and produce up to 7.5 million gallons of fuel oil #5 and #6 per year. The patented heating system is easily scalable and is powered by the biofuel it produces, making it a practical and environmentally sound solution for generating biofuel from FOG.

The benefits of reclaiming advanced biofuel from FOG

The environmental impact of reclaiming brown grease as an advanced biofuel makes the Greasezilla FOG solution incredibly innovative. Brown grease burns much cleaner than fossil fuels, which helps reduce greenhouse emissions. Additionally, the advanced biofuel is reclaimed from a massive supply of available FOG that needs to be processed regardless of use.

Energy consumption will continue to grow. Reclaiming biofuels from grease trap waste provides a readily available alternative source of energy that reduces dependence upon fossil fuels. With the U.S. Energy Information Administration projecting that world energy usage will increase 50 percent by 2050, it is becoming critical to find alternative means of energy generation to support energy needs while reducing the carbon footprint of continued industrialization.

About the Author: Ron Crosier is a civil engineer with more than 20 years of grease trap waste (GTW) collection and disposal experience. He developed and patented the Greasezilla technology to capture the brown grease energy contained in grease trap waste while also addressing his sanitation company’s costly disposal issues. The prototype he first developed in Ansted, WV, allows his company to generate revenue by harvesting the brown grease product collected in his local market which he then sells through his Greasezilla Fuel division to markets around the world.