Greasezilla in the Big Easy

Local receiving stations have been experiencing frequent shutdowns and other complications, leaving pumpers to compete for grease disposal at a reduced number of commercial waste sites. Unfortunately, that much demand ultimately results in long wait times and steep tipping fees for the pumpers.

Last year, when the site of the largest grease disposal company shut down for several weeks, the situation became dire. Grease trap pumping came to a standstill. Traps and interceptors needed to be serviced, pumping trucks were full, and there were no nearby sites able to handle it. As a result, pumpers had to drive hundreds of miles to find disposal locations, adding significant costs.

For local pumper Carlo Cacioppo, these disposal challenges led him to search for other options. He found a solution that has not only transformed his business, but also fills a critical need in the region.

WEIGHING THE COSTS OF FOG DISPOSAL 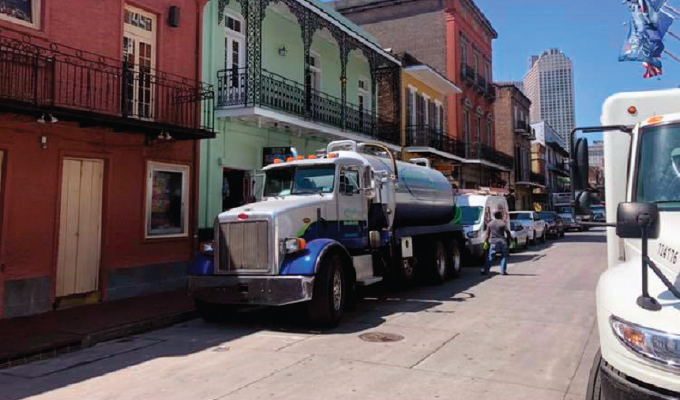 Cacioppo learned about the Greasezilla® FOG separation system during a monthly meeting of the Sewerage and Water Board of New Orleans. The prospect of installing a system that could alleviate his disposal problems and recycle the FOG into a high-quality biofuel was intriguing enough for him to inquire about Greasezilla.

“I initially figured that a system like Greasezilla would be too expensive for my family business,” says Cacioppo, “However, as business grew, we began running into disposal problems. I realized we had to become independent and start doing things on our own. We were having a lot of difficulties disposing of the waste. And then on top of that, it was too costly. If we could afford to pay somebody else for disposal, we figured we could afford to pay for a Greasezilla system that would help us process FOG, get rid of it and even use it.”

Developed by Ron and Mary Crosier to improve FOG disposal for West Virginia-based Crosier’s Sanitary Service, Greasezilla is a turnkey standalone system that separates and processes FOG waste. The end-to-end solution enables the operator to remove FOG from the grease trap waste stream, reduce disposal expenses, create new revenue and run a cleaner, greener, more eco-friendly operation. Greasezilla operates without dewatering; does not require polymers, flocculants, or chemical treatment; and leaves nothing to be landfilled.

By taking FOG disposal in-house, Safeway Used Oil & Grease could control costs and independently manage FOG from pumping through to processing. Safeway’s trucks would be able to tip their loads on site and let Greasezilla do the rest.

After reviewing the mechanical, economic and environmental benefits of Greasezilla, Cacioppo and his family decided that they needed Greasezilla to better service their customers and expand their business. 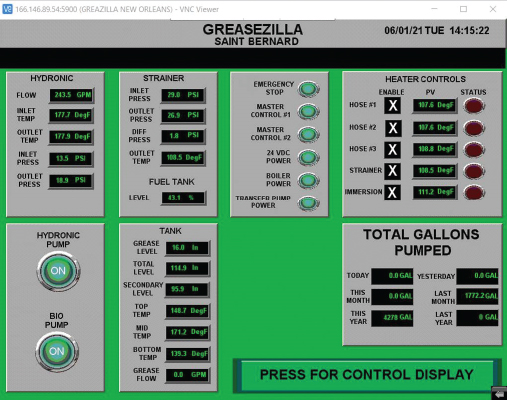 In early 2021, Safeway Used Oil & Grease installed its own Greasezilla system. Since the installation, much has changed for Cacioppo and his business. Not only is Safeway saving on tipping fees and transportation costs, but they have also gained new revenue streams.

It wasn’t long before other pumpers took notice and began asking Cacioppo if they could tip at Safeway. Greasezilla’s processing capacity easily allowed Cacioppo to accept outside loads, providing a much-needed alternative disposal site in the region. The tipping revenue com

“Things are working flawlessly,” says Cacioppo, “Greasezilla makes waste disposal a whole lot simpler, for me and for other haulers. My goal is to work together with other people in our industry to provide faster, more dependable and ecologically responsible FOG disposal throughout New Orleans.” bined with sale of Greasezilla’s Brown Grease ABF and the BOD-rich batter have significantly increased the company’s cash flow and profitability.

The current system is working with such success that Cacioppo is considering the addition of another reactor tank and the possibility of opening a new Greasezilla site beyond the New Orleans metropolitan area.